The human mind has always been something I’ve been fascinated about. The emotions that control us, the thoughts that linger in our head and haunt us although years have gone by. Don’t you think it’s amazing how something so little as just a scent wafting by your nose can remind you of so many nostalgic memories? Or to say a tragic accident can cause us a life time of pain and suffering. I’ve always wondered how it would be like if we were to lose all of our feelings one day and do our best to continue on moving forward with life. I’ve been watching an anime called “Parasyte” recently and I have to say that this anime displayed those thoughts splendidly.

Here’s a brief summary from the wiki page:

Parasyte centers on a 17-year-old teen named Shinichi Izumi, who lives with his mother and father in a quiet neighborhood in Tokyo. One night, worm-like creatures called Parasites appear on Earth, taking over the brains of human hosts by entering through their ears or noses. One Parasite attempts to crawl into Shinichi’s ear while he sleeps, but fails as Shinichi is wearing headphones, and enters his body by burrowing into his arm instead. Because Shinichi was able to prevent Migi from travelling further up into his brain, both beings retain their separate intellect and personality. As the duo encounter other Parasites, they capitalize on their strange situation and gradually form a strong bond, working together to survive.

I started off with this by reading the first 10 chapters of the manga and the same day figured I’d watch it from the start. There were very subtle differences from the manga and the anime but nothing too concerning other than the name change of the main character, that kind of threw me off. No matter though, I thoroughly enjoyed the anime all the way to the end. This anime, for me at least, had the perfect blend of gore, love, comedy, etc. The music titiled “Next to you” that plays towards the end of closing the episode (not the actual ending theme) is a very mesmerizing melody that I just can’t get enough of. Hell, I’m listening the extended one hour version of the song as I’m typing this. 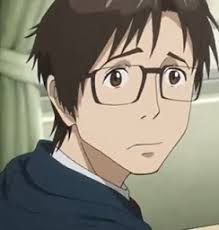 Shinichis character design in the beginning

The character development through the series was impeccable.  Shinichi (the main character) was just a mere high school student as his journey through “Parasyte” starts off. What the creator did with the character design as the story progresses was a positive one. More geared towards the end (maybe even halfway through) you can tell that his character had matured over time, and that’s what I appreciated about the series as a whole. I’ve seen plenty of animes where the characters barely ever show any sign of age (unless you’re Genkai) and honestly, I couldn’t tell you why but that just bothers me. Even Migi (the parasite that takes over Shinichis right hand) even matures as  a character.

If you’re looking for an anime that’s bland and boring I would have to tell you to look elsewhere. In a majority of every episode there is just the right amount of action to keep you going and of course, cliff hanger endings that leave you want to press that next button as quickly as possible. I’ve gotta admit that this anime was a roller coaster of emotions for me. I felt hatred, anger, sadness, happiness, every single human emotion you could think of this anime brought out of me. And if you’re definitely looking for an anime with an ending that’ll throw you into a spiral definitely check this out then!

Perhaps I’m praising this anime a bit too much but it’s been such a long time since I’ve actually watched an anime that had kept me genuinely interested from beginning to end. Overall rating, 9/10. Only because there were some parts that made me frustrated with Shinichi’s personality, but I do understand that he had to keep his humanity.

Have you watched Parasyte yet? What’re your thoughts on this anime? Be sure to leave to a comment! Be sure to listen to the addicting song “Next to you” that I’ll post down below! Till next time!