Probably known as one of the most heart wrenching animes known to human-kind. I recently revisited this anime last weekend and it still has the ability to make a grown man cry, I had to punch a wall to feel manly again. I remember after my first watch I searched frantically to find out of there was a second season for it or if there was even one in the makes, but alas my search ended in failure. You know when you complete your favorite game and you go straight to the internet for more info on a sequel or a third part but find yourself to hit a dead end of nothingness and you’re thrown into a spiral of misery, pain, and agony? That’s exactly how I felt. Hit the jump to find out more!

Angel Beats! anime revolves around protagonist Yuzuru Otonashi, who wakes to find himself in a strange high school setting. Otonashi has no memories prior to waking, but learns that the location is a strange afterlife and all of its inhabitants are deceased. He joins a group which rebels against the afterlife and its primary enforcer, Angel. A young woman named Yuri Nakamura leads the group, called “Shinda Sekai Sensen” (Afterlife War Front). The cast from the show is nothing less than fascinating. As with every anime, each character has their very own personality, but with Angel Beats! I feel as if the cast blended well together, hand in hand and held very similar traits from one another. While watching the show I didn’t find myself to really hate anyone from the show nor did any irrational thoughts ever cross my mind. The back stories behind every character will definitely have you in tears and this show spends no time wasting that, I swear the creators had in mind that they wanted the viewers to really feel like you were one of the members of the group. I’ll speak about some of my favorite ones down below.

Otonashi; the main character of the anime, has a really good heart that I do commend him for. His character’s persona really makes you stop and think about your life and wonder to yourself  “when was the last time I did something for someone without a second thought?” When everyone was busy trying to keep Angel away from the group, he was busy thinking about what was going through her head, how she felt, and many other things among that. Otonashi’s back story is; his beloved little sister in the hospital, she was sick and didn’t seem to be getting any better. Day in and day out he would work at his construction job and purchase mangas for his little sister to read, she LOVED to read. 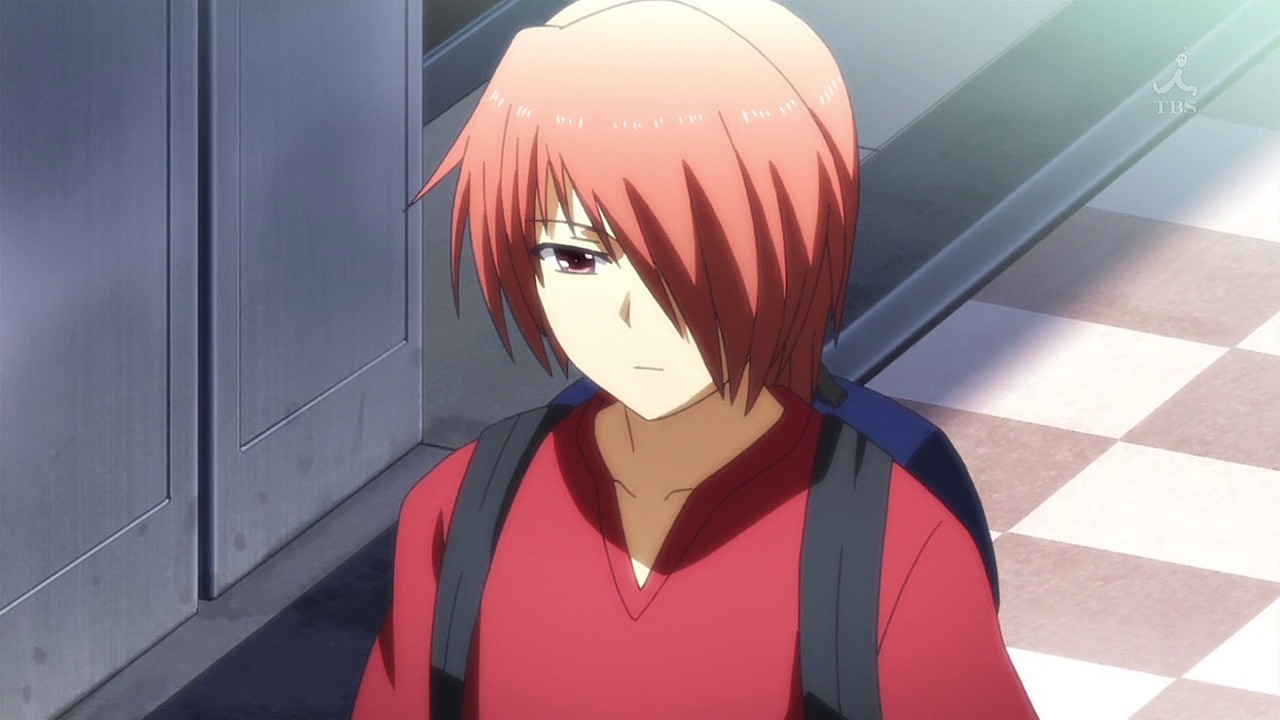 He never really did talk to anyone, he minded his own business, worked, and went to the hospital, that was his routine. Eventually Christmas time rolls around and he decides that he wants to take his sister out on the town (just a stroll through the park and stuff). He decides to work another job to save up money to buy her a present and take her out to a fancy restaurant so she’d be able to experience something she’d never been able to before. The doctors wouldn’t allow it but he went against their word and snuck her out of the hospital. As she was on his back during the walk in the park, that was one of the most touching scenes I’ve ever saw. What happens after, I’ll let you find out if you decide to watch this.

Yuri Nakamura; also known as Yuripee, the leader of the group “Afterlife War Front”. She’s a downright sweet heart but also knows how to take command also. She puts up this tough woman front to disguise her true inner being. I’ll at least go into her back story. Yuri grew up in a wealthy family and had 3 siblings, she lived in a rather large house out in the woods I’d say but not too far out from civilization, maybe it was their summer home now that I think about it. But one day her parents had went out to town and robbers had broken inside the house taking the kids for hostage. They looked at Yuri knowing that she was the oldest out of the bunch and demanded that she’d look for anything worth of value or else her siblings would be dead. They gave her 10 minute intervals before killing each sibling. Yuri scrambled around and around trying to look for anything, she saw a vase and decided since it was big and heavy it’d be worth something. She broke it and the first of her siblings died. Police arrived to the scene 30 minutes later only to find a soul-broken Yuri and all of her siblings dead.

So as her role as the leader of the group she’d sworn to herself to protect anybody she can from dying again, which is weird because you can’t die in the world of Angel Beats! Well you can, but you’d just come back to life.

Last but not least, Shiina. She didn’t really get a lot of screen time but her character design is one of the best in the anime, in my opinion at least. She’s a female ninja that fights with traditional Japanese weapons. It’s too bad that she didn’t have a back story because I would love to know how she ended up in the Angel Beats! world. She reminds me of Ibuki from Street Fighter in a way, perhaps because female ninjas aren’t too common and she’s definitely able to kick some bad guy butts without a problem! She does add very subtle comedic ways to the show.

Such as her love for puppies and then after discovering that Otonashi had surpassed her in the journey to the guild she ended up balancing broom sticks, scissors and a bunch of other things to strengthen her spirit haha, it’s actually pretty hilarious.

And before I get to mention, the MUSIC! Usually I’m not too much a fan of the music that’s featured in anime’s (don’t hurt me!) but Angel Beats! hands down has some of the best music ever! Hell, after revisiting the anime I just had to download some of the songs that I heard and found a couple covers that I really liked also. The song posted is “My song” sung by the group in the anime known as “Girl Dead Monster” I’ve also added the english cover if you’re not into reading translated lyrics. The english cover is sung by a youtube singer by the name of “AmaLee”. Personally, I think both are great either way!

And that about wraps it up for this Throwback Thursday post this week. Hope you folks enjoyed it! My question to you is, do you hope they make another full season (if ever) of this show? Also, which part/character/story was your favorite? Be sure to leave a comment!