What if you died and you were given a second chance at life? I guess the other question to follow is what if that second chance wasn’t your own life? For years this thought had lingered in my head, well maybe not this thought exactly but I had always wondered what it would be like to live someone else’s life. Colorful does a great job on laying out this kind of scenario for you. It also does a great job on giving you chills as you think about the past. Every teenager has been through the phase that the protagonist has gone through. Heart break, suicidal thoughts, hatred toward parents, making that first big promise to your best friend, etc. If you nodded your head to any of the things that I just listed then I’m sure you’d enjoy this movie.

I always enjoy when people message me on facebook, instagram, tumblr, etc when they want me to check out an anime or a movie that they thought was really impressive to them. My friend had messaged me about this movie and at first I was just going to disregard the movie but thought to myself “ehh … you don’t have work tomorrow so might as well watch something right?”. So, that’s what I did, I picked up some taco bell as a late night snack and so I’d be able to let the movie buffer so I could watch it without any interruptions.

The movie jumps you right into what I would call “the spirit world” and puts you in front of a kid named Pura-Pura saying the main character had won the lottery and is granted a second chance at life. Do you know where they’re going? No, of course not. Once you’re granted a second chance at life it isn’t for you to decide where to go I guess. After some dialogue the person jumps into a portal and wakes up in the real world. Here is where we’re introduced to the main character, Makoto. 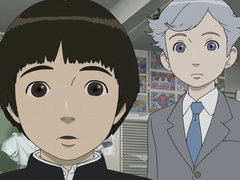 So before I move on any further I would like to add in that at first I didn’t think the animation was all too great. Hell, I was actually about to ditch the movie and watch something else but for some reason I pushed past the animation and ended up watching the whole thing and tearing up at a few parts of the movie.

Makoto wakes up in the hospital bed from his failed attempt at suicide. Everyone’s happy, his moms hugging him, his dad is also, and his brother is astonished from the recovery. The doctors had listed him as dead a few hours prior and of course the doctors and nurses couldn’t believe it themselves that the young boy had woken up! So, you think that’s the end of the movie right? Nope, there’s much more to it.

Upon Makoto returning home with his family he eats his dinner and converses with his family just as a regular teen is supposed to. Makoto enters his room after dinner and is greeted again by Pura-Pura who then gives him the run down on what needs to be done. The soul that took over Makoto isn’t actually Makoto so he doesn’t know how to actually act as Makoto himself. Pura lets him know that Makoto hated his father due to the amount of work and overtime he had been putting in before the time of his suicide. Makoto had always loved his mom until recently also where she had found out that she had been cheating on his dad with an instructor of hers, and his brother had always teased and put down Makoto because of how low his grades were.

This part of the movie is where things begin to get interesting. Makoto seems to have a liking towards his father again and he begins to resent his mother. Even going to far as to never eating a single item of her food that she cooks. And I’m sure knowing your child doesn’t want to eat your food is probably the worst feeling of all when it comes to being a parent.

After maybe 2 weeks of staying at home and being resentful towards his mother, Makoto decides he wants to return to school. Everyone’s staring at him in disbelief, some because they weren’t exactly too sure who he was, well actually most stared at him because they weren’t sure who he was. Makoto was actually a real big loner that no one really wanted to associate themselves with him. Until one of the popular chicks in school greets him and lets him know that she’s been wondering where he’s been and of course that’s where he begins to fall in love again.

Now I could go ahead and ruin the rest of the movie for you but I’ll let you decide from here if it’s interesting to watch or not. As I said in the beginning of this, it does a splendid job on the stages of an everyday teen growing up. It reminded me of how I was when I was growing up. It’ll pull at your heart strings as he realizes his first crush was a … and it’ll hurt you even more when he begins to cry and admits that he wants to go to a different high school because of …. Like I said, if you want a refresher on how it is to be a teen, watch this movie.

I found it strangely refreshing for myself because I forgot exactly how it was being a teen and I still look at my little brothers as little kids and forget that they’re 18 and that they’re still trying to figure out this big puzzle that we call life. I don’t know about you folks but my teen years is the era that I learned the most about myself. I guess that about wraps it up for me. Until next time!

2 thoughts on “My Thoughts: Colorful”